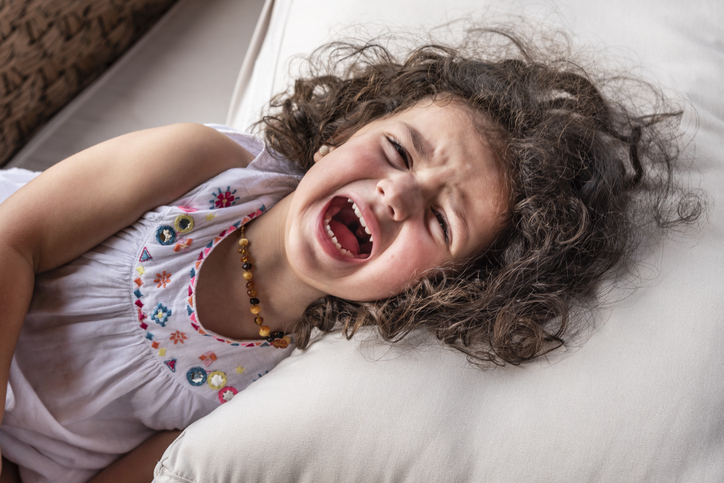 As Murphy’s Law would have it, children’s tantrums seem to happen at the most inconvenient times. Your toddler or independent-minded 3-year-old turns red, screams, stomps, and appears possessed when you’ve finally gotten everyone geared up for a family walk, or wrangled that video call you spent days coordinating with relatives to get everyone live at once — or even worse, when you need silence for your weekly video conference call at work.

“What’s gotten into you? We don’t have time for this!” you might think. Everything you say and do seems to make the tantrum worse, and it takes all of your remaining resources not to throw a tantrum yourself. What can you do instead when your child throws a tantrum? Below is a three-step strategy that can help.

Validate the emotions behind the tantrum

Validating someone’s emotions means acknowledging them. You are not agreeing or disagreeing with the feelings; you are demonstrating that you hear the other person.

You likely have noticed that logic does not go over well with a child throwing a tantrum. For example, let’s say your child throws a tantrum while demanding a cookie before dinner. “Why are you so unhappy? You know you cannot have dessert before dinner,” you point out logically. Most likely, the child’s ears will close, and the tantrum will escalate because they don’t feel heard. Instead, validating their emotions can help them identify how they are feeling, which is one step toward helping them regulate or calm their emotions.

Your child probably won’t smile and agreeably walk away. However, validating can prevent an escalation of the tantrum and curtail the intensity of the emotion.

Any behavior that gets attention will continue. Imagine a garden: your child is the rose that needs just the right amount of sunlight and water; the dandelions are the unhelpful behaviors, such as tantrums. If you so much as blink in a dandelion’s direction, you know that you will have a garden full of dandelions. This is why after validating once, the next step is to ignore.

Some parents are concerned that they aren’t doing anything when they ignore. You are; you are ignoring actively, which takes effort. This will be very tough. Expect the behavior to get worse before it gets better (what is known as an “extinction burst”). Remind yourself that you are ignoring the dandelions and not your child. Pay attention to anything else: pick the lint off your sweater, do the dishes, or count the clouds in the sky. Do not water the dandelions, though. If you ignore actively for 10 minutes and then eventually shout at your child or just give the child the cookie, the child will learn that he needs to push longer to get attention or the desired outcome. Then you will have even more dandelions in your garden.

The moment your child re-engages in a cooperative manner, praise your child enthusiastically and specifically. For example, “Way to go on joining us at the dinner table respectfully! I am really proud of you.” If you start to hear pleading for a cookie again, go back to ignoring the dandelions. When the rose — your child — returns, provide more praise. You may feel silly bouncing back and forth, but it’s important to water the appropriate flower in the garden — that is, the behavior you want to see.

These strategies apply even when you are in public. Understandably, you may be concerned about what others think of you as a parent while you actively ignore the tantrum. Some parents worry that others are imagining that they do not know how to handle their children. You also might feel utterly humiliated and helpless that you cannot control your child’s behavior.

As you take a deep breath, remember this: you certainly are not the first parent to have a child throw a tantrum in public. Other parents around you likely were in your shoes not long before you. If you feel compelled to do so, you can let others around you know that you are ignoring actively to help your child settle down.

No matter where the tantrums occur, validate your feelings, too. Feeling frustrated or embarrassed is understandable. Remember, though, that the rose will return if you do not water the dandelions.